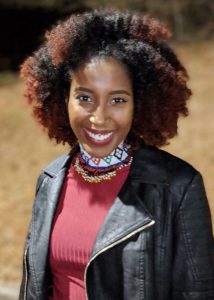 One of the top award winners of the CIA Medical 2018 Scholarship honoring healthcare heroes is Amie Drammeh, a student at Georgia Baptist College of Nursing of Mercer University.

Amie’s winning essay centers around the orthopedic surgeon who operated on her grandmother in Senegal, West Africa. Through empathetic communication and compassionate care, the surgeon was able to provide the best treatment for her grandmother’s situation, and went above and beyond by continuing to attend to her health after surgery without pay.

We wish Amie all the best in her lifelong pursuit of becoming a nurse, and support her plans to make a positive impact on her community and native countries in Africa.

I was walking up a flight of stairs, my feet in pain from the walk to the nearby Dakar hospital located in Senegal, West Africa, but was long forgotten as anxiety began to crawl through my skin. It had been nearly three years since I last saw my grandmother; and nothing could have prepared me for the moment I cautiously stepped into her hospital room. Uncle Pa, Dad, and my little brother initially blocked me from any view of the room but the familiar sound of my grandmother’s voice ringed through my ears. My grandmother, now an 85-year-old woman no longer looked like the woman who would chase me around the house when I misbehaved; she now appeared much feebler. What looked like millions of wires clung to my grandmother’s body, along with a blood bag line hanging over her next to her bed. My grandmother was receiving blood transfusion because she was anemic after surgery. I hurried towards her fragile arms as she cried tears of joy and pain. It was a heartbreaking moment for me, witnessing my grandmother appearing so feeble and weak for the first time; her left leg was amputated from a few inches downward.

Losing a limb at such an old age was very traumatizing for my grandmother. At first, she developed poor blood circulation in her left leg, which resulted the decaying of her leg tissues. Soon afterwards, she developed gangrene in her leg. This condition caused my grandmother a lot of severe pain and numbness in her leg, and all medications and antibiotics she was given failed to treat her. As result, my family flew her to Dakar to seek further orthopedic care for her.

When the orthopedic surgeon, Dr. Njie broke news to my family that there was nothing left to do for my grandmother’s leg but to undergo amputation, my grandmother was very frightened and upset. This was very emotional for her because she did not want to cut her leg and understood little about the severity of her leg’s condition. It was the first time my grandmother was ever admitted in a hospital, and it was difficult for her mostly because she was away from family. However, Dr. Njie was very caring, compassionate and attentive to my grandmother’s needs, and assured her that she will get through this. Dr. Njie was significant to my family and I; not because he was the surgeon in charge to amputate my grandmother’s leg, but because of how dedicated he was in seeing that she would make a full recovery. Dr Njie was able to convince my grandmother that surgery for the only option. He was able to convince her to weigh the risks and benefits. She could die soon if she did not amputate her foot and would not live much longer to see her family. He convinced her that with a successful surgery, she could buy more time to see her grandchildren grow and live longer to spend time with her family. He explained to her that he had other patients who had been in the same situation and made it through the surgery and recovery.

“Dr. Njie was significant to my family and I; not because he was the surgeon in charge to amputate my grandmother’s leg, but because of how dedicated he was in seeing that she would make a full recovery.”

After the surgery, my grandmother was finally released to our family for her recovery. Because of the severity of the gangrene and her age, my grandmother post-surgery required long-term treatment for her recovery. Dr Njie was a professor at a Dakar University, he was one of few surgeons in the hospital who also ran an outpatient client. Therefore, he was very busy as a University Professor because he taught at the University teaching hospitals, saw patients at the hospitals, ran his out private clinic and was also a family man. However, Dr Njie was very dedicated and wanted my grandmother to heal and successfully recovery from her surgery.

Although Dr. Njie’s work as a doctor for my grandmother was completed, he decided to continue to treat my grandmother without pay. My grandmother was confined to a wheelchair and had difficulty working with a cane. Hence, she could not come to Dr Njie’s outpatient clinic for treatment.  Dr. Njie came to our house every week for 3 months to clean my grandmother’s wounds, change the bandage, and treat the wound. During each visit, Dr. Njie engaged my grandmother in conversations about her mental status and well-being. He truly cared for her well-being, and tended to her physical and phantom pains. Due to my grandmother’s poor blood circulation to her left leg, her recovery was slow. The wound was not responding to standard treatment. Dr. Njie took the time to research other methods of treatment in order to speed up the recovery. He also understood the financial burden of our family given the fact that we had to rent our apartment in Dakar which was not cheap. Hence the longer that my grandmother took to heal, the higher our expenses in Dakar. Dr. Njie was able to find a treatment regimen that worked for my grandmother and was very patient with her.

Dr. Njie was by my grandmother’s side every step of the way. When my grandmother’s wound refused to heal, she became frustrated and had outbursts, and even then, Dr. Njie’s presence symbolized progress, as he was encouraging towards my grandmother as he would always give her a positive outlook on her recovery process. He would tell her she was doing better each day, and at the same time he was patient even when his normal treatment regimens failed or took time to work. He remained calm and was able to come up with a different treatment regimen for her wound to further her healing process. Eventually, my grandmother’s wound healed. Then she needed to start another phase of her recovery which included use of a prosthetic leg. Dr. Njie kindly assisted our family to find a company that sold prosthetics legs. He assisted with the “fitting of the leg” in order to make a customized leg for my grandmother. Eventually, my grandmother was fitted with a prosthetic leg and left Dakar for Gambia.

“He would tell her she was doing better each day, and at the same time he was patient even when his normal treatment regimens failed or took time to work. He remained calm and was able to come up with a different treatment regimen for her wound to further her healing process.”

Dr. Njie was an extraordinary kind and talented doctor and nice person. He was compassionate person and had a lot of empathy. He took the time to provide full care to my grandmother even with his other obligations. He showed a lot of empathy and treated my grandmother like it was his obligation and like his own family. The amazing thing about Dr Njie that he did want to be paid for his services although he took taxis from his outpatient clinic to my grandmother’s apartment. If it were not for Dr. Njie’s help, my grandmother’s road to recovery may have taken more time, more money, and more suffering for my grandmother and I am truly thankful for his impact on my family and the lives of others.

About the Author: Amie Drammeh

Amie Drammeh has considered a career in healthcare ever since her childhood years. Her mother is a Microbiologist who wore scrubs to work and she could recall eagerly dressing up in her scrubs on school Career Day. It was not until Amie’s third year of high school that she began to strongly consider becoming a nurse. Shortly after, she decided to pursue a career in nursing after her volunteer experience during my final year of high school at a Faith-based-clinic, Shifa Clinic in Duluth, Georgia.

Amie’s educational goals are to attain a Bachelor’s in Science of Nursing at Mercer University, and to further pursue her Master’s in Nursing to become a Pediatric Nurse Practitioner. She aspires to excel in her studies and to give back to her Atlanta community as well her native countries, Eritrea and Gambia, located in East and West Africa where infant mortality rates are high. Someday she hopes to open her own practice alongside a physician.