Home » Insights Blog » Cesarean Awareness Month: Everything You Always Wanted to Know About Cesareans But Were Afraid to Ask

Cesarean Awareness Month: Everything You Always Wanted to Know About Cesareans But Were Afraid to Ask

An Introductory Guide to C-sections

April is Cesarean Awareness Month, a period aimed at raising awareness about Cesarean deliveries. One of the goals of the campaign is to help reduce the c-section rate in women who do not have a clinical need for surgery, as well as promoting VBAC (vaginal birth after caesarean), but it also supports women in their recovery from this major abdominal surgery.

WHO (The World Health Organisation) advises that the ideal rate of Cesareans should be between 10-15%, although some sources, such as researchers at Stanford and Harvard, recommend 19%. However, in the US, there has been a steady increase in the number of Cesarean deliveries, with the CDC reporting that 32% of babies were born via c-sections in 2015.[1]

C-sections are advised for a number of reasons, such as when a woman is carrying more than one child, and when the impact of IVF (In Vitro Fertilization) is combined with the natural rate of multiple births, this will organically increase the number of c-sections. A mother’s age is another factor, as is obesity. Older or obese women are more likely to get the procedure done. Artificial induction also carries with it a higher risk of c-section. Add into this equation a general trend among many healthcare providers and insurance companies to prefer c-sections to vaginal birth, it is unsurprising that the surgery rate is increasing.

What is a Cesarean Section?

A Cesarean section is an abdominal surgery carried out to deliver a baby. An incision is made in the front wall of the abdomen and womb out of which the baby is delivered. A c-section may be elective, i.e. planned in advance when a vaginal birth is thought to carry with it a greater risk of complication, or an emergency, i.e. when labor has begun but a problem has developed which means that a Cesarean is considered to be safer or necessary.

Cesarean deliveries have been carried out for centuries, with descriptions of Cesareans being recorded in ancient literature around the world. Possibly the earliest example was Bindusara, the second Mauryan Samrat (emperor) of India, who was delivered by c-section in circa 320 BCE. It has also been surmised that Julius Caesar was so-called after an ancestor born by c-section, but this theory is now contested, since Aurelia, Julius Caesar’s mother, survived his birth and early c-sections were usually carried out on women who died during childbirth.

Where a Cesarean was considered necessary, the mother generally died, although records suggest that Jewish women in Roman times frequently survived the experience. The earliest definitive record of a woman surviving a Cesarean birth was Beatrice of Bourbon in 1337, but mortality rates remained high until relatively recently, with the surgery considered to be a last resort. It was only until the importance of hygiene was recognized that this rate started to fall, combined with an improvement in medicine, e.g. anesthesia and antibiotics, as well as better techniques. 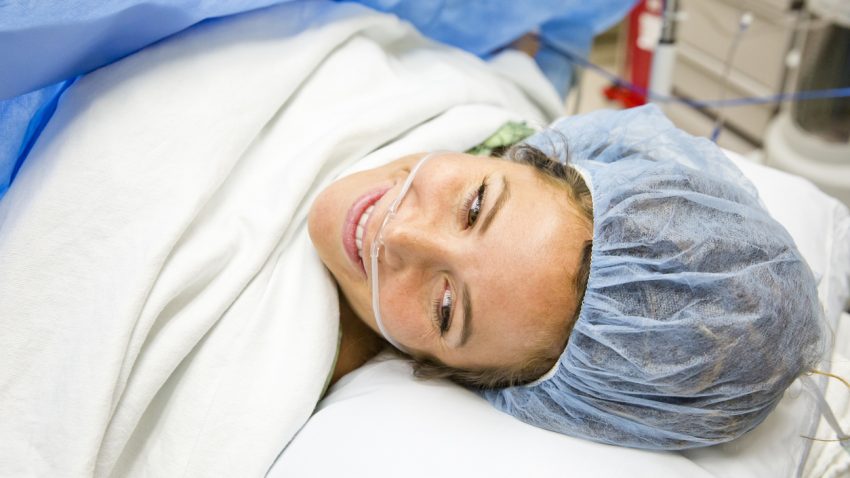 When is a Cesarean Necessary?

Although the high rate of c-sections in the US suggests that there may be a percentage of surgeries that are carried out without clinical indication, there are many situations in which Cesareans can reduce complications and save lives. A Cesarean is likely to be necessary under the following circumstances:

What Are the Risks of a Cesarean Delivery?

Whichever way a woman births, there is always an element of risk. Some of the risks of a Cesarean delivery are also associated with vaginal births, such as infection, blood loss or blood clots, and a reaction to medication or anesthesia. There is a risk of uterine rupture, regardless of whether a woman has a history of Cesarean births, but previous Cesareans increase this risk. As a surgical delivery, c-sections also come with the additional risks typically associated with surgeries, such as postoperative adhesions, and incisional hernias. Women who have a Cesarean delivery are also at increased risk of postnatal depression and other long term complications, such as fertility issues.[3]

In addition, there are also risks to the baby with Cesareans, including accidental cuts by the surgeon’s scalpel and breathing difficulties, especially if babies are born before 39 weeks of pregnancy. Long term studies also suggest there may be a longer term impact of a surgical birth, including an increased risk of asthma, and diabetes. Both mother and child are at an increased risk of death during the birth with a c-section.[4]

Anecdotally, it is believed that health professionals do not always provide complete information when discussion birth options, possibly due to the chance of legal action following complications with a vaginal birth.[5] Given the potentially serious impact of complications following a Cesarean, it is important that women research all their options fully so that they can make an informed choice as to the best type of birth.

What Happens During a C-section?

An IV will be sited in the mother’s arm or hand to allow for easy delivery of fluids and medication. The area for surgery on her abdomen will be washed and her pubic hair may be shaved. In addition, a catheter will be inserted into her bladder to remove urine, which will be left in place for approximately 24 hours after surgery.

In most instances, a regional anesthesia is used to numb the lower half of the body, either an epidural or spinal block. This is safer than a general anesthetic, which results in the woman being unconscious through delivery.

Once the woman is sufficiently anesthetized, the surgeon will make a horizontal incision into the abdomen. This will normally follow the bikini line. In rare circumstances, a vertical incision may be used instead, but this method has fallen out of favor, since it increases the risk of complications.

Once the abdomen has been opened, an incision is made into the uterus. Contrary to popular belief, the woman’s stomach muscles are not generally cut, having separated during pregnancy. Cutting into the uterus will rupture the amniotic sac around the baby, allowing for the baby to be delivered. After the baby is taken out of the uterus, the umbilical cord is cut, sometimes by the woman’s birth partner, and the placenta will be removed from the womb. The baby is given a preliminary examination and, as long as there are no problems, will then be taken back to its mother for important skin-to-skin contact.

After the baby and afterbirth have been delivered, the mother’s uterus will be stitched up, using dissolvable stitches, and the abdominal wound will be closed with either stitches or staples, which will be taken out before the woman is discharged from hospital care. The entire operation usually takes between one and two hours depending on whether there have been any complications.

Preparing For an Elective C-section

If a woman has chosen to have an elective c-section or has been advised to have one on medical grounds, there are a number of things she can do to make the experience as pleasant and comfortable as possible. She could ask whether she can have her choice of music played during the operation. Although videos may not be allowed in the OR, cameras are usually fine so the birth partner can document the event. It may also be possible to have the screen lowered or a mirror put in place so that the woman can see her baby being born. Another point to consider is whether the woman would like someone with her to support her during the birthing process and after the surgery. It may be that the woman would like her birthing partner to stay with her in the recovery room while the baby is under observation or she might prefer to be alone for a while.

Healing From a Cesarean

Although a c-section is major surgery, nowadays, women rarely spend more than 2-4 days in hospital. However, it may take a few weeks until she starts to feel like she is recovering. It is natural for the abdomen to be sore and it will take a while for the skin and nerves to heal. The mother should have been supplied with narcotic pain medication to help manage the pain, although some women find that complementary medicines, such as homeopathic arnica, may help.

It is normal to bleed for up to six weeks following surgery and women are advised to avoid sex for the initial few weeks after the Cesarean. They should also avoid strenuous activities, e.g. lifting heavy objects. If the baby is large, the mother may need assistance with picking it up and putting it down, so bear this in mind, especially if planning to breastfeed.

Anyone who has experienced birth will tell you that it rarely goes to plan. As Kristen N Burris L.AC., M.S.T.O.M., Dip. Ac. told us, “Even with all my experience as a natural health care provider, when I found myself laboring intensely for 12 grueling hours with my first son I was shocked to hear “don’t push again!”. Wires pulled, gurney rushed, tears falling, our son was taken by emergency c-section with no time to appropriately anesthetize me. I had 2 1/2 minutes of anesthesia and on average patients need 15 minutes to be completely numb for c-section. I had no idea, while actually pushing your child out, you could still be a candidate for c-section. It was something I now educate my patients on while we are gently inducing their labor with acupuncture.”

If you are expecting a baby, make sure you put together a just-in-case plan so that you are prepared in the event of an emergency c-section being necessary. Whether a baby is delivered vaginally or through surgery, it is important to bear in mind that you will have given birth, which is a major trauma for your body to experience. Be kind to yourself and allow time to heal.

Do not feel guilty if you need a Cesarean. Some births need extra help, no matter how prepared you are. However, if you find that you are struggling with your emotions following a c-section, then do not be afraid to seek out support, possibly from your support partner or healthcare provider. There are many good online discussion groups as well, so try searching on Facebook or other social media for Cesarean support groups. If you can find one in your local area, you may even be able to meet up with other women to share experiences and support one another.

Have you or your partner needed to have a C-section? What was your experience like? We’d love to hear your birth stories in the comments below.