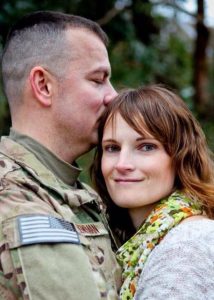 Christina Anne Bowman with her husband

One of the top award winners of the CIA Medical 2018 Scholarship honoring healthcare heroes is Christina Anne Bowman, a student aiming to graduate in Spring 2019 from Laramie County Community College with a degree in Health Information Technology Management.

An Air Force family, Christina and her young children lived in Asia. When her daughter Raegan fell ill, Christina faced obstacles in getting her the proper diagnosis and care needed. Christina credits a civilian doctor, Dr. Marshall, with saving her daughter’s life by ordering her to be transported to Hawaii for treatment. She recognizes this selfless act, which cost him his job, as the turning point in her daughter’s healing.

We understand the difficult decisions that medical professionals have to make on a daily basis. When we read stories like Christina’s, it gives us hope that there are doctors who put the wellbeing of their patients first, no matter the external circumstances. Thank you for sharing the positive ending to your daughter’s experience – we hope it inspires our readers.

CIA Medical is proud to present Christina’s 2018 Scholarship Award winning essay on Dr. Marshall, who treated her daughter in Japan.

There is quite a back story to the person that made all the difference in the world to me and more importantly to my daughter’s life. We are an active duty military family and with three children under the age of five, we were stationed at Yokota AFB, just outside of Tokyo, Japan. Our base had a very small hospital that boasted 4 inpatient beds with minimal active-duty staff. Shortly after my husband deployed for a year to Afghanistan, my three year old daughter, Raegan, fell down concrete stairs and hit her ear on the edge of the stair. Within 24 hours of the fall, Raegan developed a severe ear infection that was pouring out of her ear. I took her into see the ENT who treated the ear infection.

At our follow up appointment, a week later, her ear had cleared up, however, I noted to the surgeon that I suspected Raegan had a sinus infection, which he said children so young cannot get sinus infections. Being that he is the professional, I backed down. After this encounter, my daughter started coughing constantly, got dark circles under her eyes and every bone in my body knew something was wrong. I started taking her in to our primary care doctor weekly and she consistently told me Raegan had asthma or allergies and started treating those, but Raegan was progressively getting worse. At one point, I could smell an infection from across the room. This all happened over the course of four months and by this point I was pleading with her doctor’s, telling them something was horribly wrong, but with no action outside of giving Raegan antibiotic prophylactics.

Finally, Raegan had a simple wellness check and when I brought her in, she had a fever of 105 degrees and was immediately admitted for pneumonia. After her discharge, I demanded to see her ENT and demanded he do a cat scan, because I knew something had happened during her fall down the stairs. He complied and seemed shocked that my daughter had an infection in all her sinus cavities, but it was too late to ascertain whether she had fractured any bones in the fall, so he recommended we take out her tonsils and adenoids immediately. We did the surgery and I was under the illusion that she would finally get healthy. However, about five days post operation, I could barely get her to move, so I rushed her in to the hospital and they did x-rays, but never told me her results. The very same evening she started retracting and I couldn’t get her fever down with Tylenol or Motrin. I rushed her back into the urgent care and they immediately admitted her again for pneumonia. They had never even told me she had pneumonia, although the radiologist noted it the day prior. This was when things went from bad to worse. Over the course of the week, we nearly lost her twice because her lower lungs had collapsed and what hadn’t collapsed had filled with mucous and started plugging, so she could not breathe. 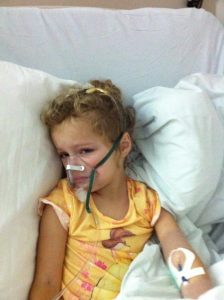 Raegan just prior to Dr. Marshall taking over her case

The second day after her admission and by the grace of God, the surgeon who was treating her had to go on temporary duty at another base and a civilian doctor (Dr. Marshall) took over Raegan’s care. Dr. Marshall had just arrived in Japan and he was an emergency room trained pediatrician, something we did not have at our tiny hospital. Twice the alarms throughout the hospital went off and twice my baby barely hung on to life and without Dr. Marshall who took quick action, she would not have survived. To make things worse for Raegan, the nurse gave Raegan 6 times the safe amount of the antibiotic in one dosage, so worries of kidney and liver damage was also now an issue. To say that week was hell is an understatement.

Dr. Marshall, however, was the first doctor who actually listened to me and started looking at causes of her long-term illness that the other doctors wouldn’t even consider. I couldn’t understand why in the past the doctor’s wouldn’t at least try and find out what was wrong with her until I sat down with the medical squadron commander and as I was begging him to transfer Raegan to Tokyo Children’s Hospital which I knew was expensive for the military and they had to provide a 24 hour translator, the squadron commander looked me in the face and said “Christina, as your husband can understand (he was a squadron commander in Afghanistan), I need to look at the bottom line”. Right then and there I knew that they were going to give my daughter the cheapest care at what could be at the expense of her life.

“Dr. Marshall, however, was the first doctor who actually listened to me and started looking at causes of her long-term illness that the other doctors wouldn’t even consider.”

However, because Dr. Marshall was a civilian doctor working for the Department of Defense, he didn’t have the restrictions the active-duty military doctors have and couldn’t be ordered to do or not do certain procedures or tests. Over the course of the next few months, Raegan continued to get sick and Dr. Marshall kept running any test he could think of in such a small hospital but no answers could be found.

Finally, Dr. Marshall ordered Raegan to be medically evacuated to Tripler Army Hospital in Hawaii where she once again developed pneumonia, extending our stay away from my other two children. It wasn’t until they did a lung biopsy that they were able to isolate Raegan as having a drug resistant H-influenza bacteria (Hib), the leading cause of death in children under the age of five prior to the introduction of the vaccine. Once they isolated the cause, we were able to properly treat her. I would like to note, Raegan had her series of vaccines, but for this one she did not develop titers.

Upon our return to Japan, I was so disheartened to find out that Dr. Marshall had been fired only 5 months after he arrived because of how much money he spent trying to help my daughter. If I could find him, I would give him a big hug and thank him for believing me when no one else did that there was an underlying factor and he did it at the expense of his job. Without him pushing, Raegan never would have been medevac’d to Hawaii and properly diagnosed and treated and judging by how sick and tired her body was of fighting Hib, I’m not sure I’d have her here today. I have tears in my eyes as I write this, because I wonder if he knows that he made such a big difference in our lives.

Dr. Marshall embodies the oath doctor’s take to save lives and I only wish more doctors had his fortitude and perseverance. Being in the military, I am surrounded by selfless hero’s, but no one is more of a hero then Dr. Marshall and we will be forever thankful for sacrificing his job for my daughter’s life.

“Dr. Marshall embodies the oath doctor’s take to save lives and I only wish more doctors had his fortitude and perseverance. Being in the military, I am surrounded by selfless hero’s, but no one is more of a hero then Dr. Marshall and we will be forever thankful for sacrificing his job for my daughter’s life.”

About the Author: Christina Anne Bowman

Christina Anne Bowman is a student at Laramie County Community College. For 10 years, she has been a stay at home mom, and more often then not, a single mom while her husband has had countless deployments. She is scheduled to graduate spring of 2019 with a degree in Health Information Technology Management and is a 4.0 student and a member of Phi Beta Kappa. Her career goals are to manage the administrative side of a surgery center, but with this degree she has the flexibility of finding employment while moving often until her husband’s retirement.