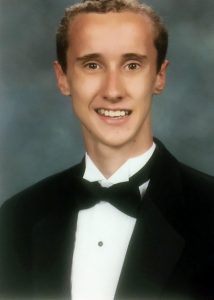 Connor’s winning essay focuses on his father, Robert Smith. When Connor faced a complex health diagnosis as a toddler, his father decided to leave the business world to study nursing with the goal of helping others who are experiencing medical challenges.

Connor’s story demonstrates the power of determination in the face of adversity and the selfless decisions he and his father took to make a positive impact on others.

An essay by Connor Smith

My father, Robert Smith, is my healthcare hero, but before he was my healthcare hero, he was just simply my dad. He had never held a baby until I was born. He was afraid to touch me or hold me. I was a preemie born 7 weeks too early. I had wires and oxygen and monitors attached to me everywhere. He was afraid he might hurt me. The nurses were so kind and encouraging. They placed me in my dad’s arms and he still fondly remembers the moment when we locked eyes. After several weeks I was making health gains and was able to go home. My mother and father were scared to take me home. But the nurses taught my parents how to care for me and one special nurse even came to visit on her day off to check up on us.

Approximately 15 months later I was diagnosed with an Arteriovenous Malformation (AVM) in my brainstem and spinal cord. An AVM is when a vein and an artery connect improperly. This improper connection causes health problems, some of which can be fatal. My parents went from going to a regular pediatrician appointment with me, to an MRI at a Children’s Hospital, to sitting in a Neurosurgeon’s office in a short period of time. The neurosurgeon looked my parents in the eye and said, “Your son has a problem. The good news is your son doesn’t have cancer. The bad news is, I have no idea what to do about it.” It took weeks for our neurosurgeon to find a neurosurgeon who was willing to take my complex case. Finally, a surgery was scheduled in New York City which was approximately 2 hours from my house.

My parents will never forget the words the New York Neurosurgeon said to them. He said, “I can’t promise your son will be the same child you are handing to me after surgery, but I can’t promise he will live if he doesn’t have this surgery.” It was an agonizing situation, but with faith and trust they handed me over to the surgeon. After approximately 6 hours, my parents received a page that I was out of surgery. It turns out that after 6 hours of exploring the arteries and veins in my brain, the neurosurgeon decided against surgical treatment. My AVM was inoperable. The Doctor explained that because I was a high functioning toddler, it would be better to leave my AVM alone. Surgery would potentially cause too much harm or even death.

This situation became a fork in the road for my dad. He decided to leave the business world. He wanted to become a nurse to help others the way we were helped through my medical challenges. He also wanted to learn everything he could about the field of medicine to help me in future situations. My father took a job for less pay but had hours that were more conducive to going back to school at night. He spent every free minute studying to become a nurse. Sometimes I would sit on my dad’s lap while he studied. I remember him reading textbooks aloud to me as I would fall asleep at night.

With 2 months left in Nursing School my dad ended up in the emergency room in extreme pain. He was diagnosed with Cancer. He had surgery 48 hours later. He only took about 10 days off of school. He wasn’t even cleared to drive when he went back to class and to clinical rotations. He was determined to finish with his classmates. My dad graduated with his Nursing degree and was awarded the STARS Nursing Faculty Award by his professors. He even went on a job interview and was offered a nursing job while recovering from cancer.

“The man who had never held a child until he was thirty years old was now going to take care of some of the sickest babies and children in the United States. This is proof that you can do anything if you put your mind to it.”

Fortunately, he was hired for a job in a Cardiac Intensive Care Unit at a Children’s Hospital. The man who had never held a child until he was thirty years old was now going to take care of some of the sickest babies and children in the United States. This is proof that you can do anything if you put your mind to it. His job was demanding, but he always made time for me. He helped me study, went to my medical appointments, sporting events and school activities.

This fall, I had a setback. I ended up losing feeling in half my body and the ability to talk and swallow. I was rushed to the hospital by ambulance where thankfully, my symptoms resolved. Unfortunately, the questions still remain unresolved. I was diagnosed with having had a small stroke. I also found out that I show symptoms of a second life threatening condition that causes Sudden Cardiac Arrest. I have spent the rest of my senior year grounded from physical activity and have spent months getting tested to try to get answers and make a plan to keep me alive and healthy. This new situation changed my life instantly. I felt like taking a medical leave from school. I was overwhelmed about how to move forward with the enormous mental burden of my medical problems and still keep attending classes, completing classwork and applying to college. But I remembered watching my dad fight for his life while fighting to get a new career and that inspired me. It motivated me to continue to fight my own medical battle with grace and grit. I didn’t quit. I persevered. My dad was able to go to the appointments with me and explain everything the doctors were saying. He helped me make a plan. I started volunteering for Simon’s Heart, a non-profit that takes action to help prevent Sudden Cardiac Arrest in youth. I also got a job at a grocery store to help out with my future college expenses. I’ve spent the rest of the school year working approximately 15-20 hours per week.

My life has had my challenges, but my dad helped me see that there has always been a way around the obstacles. Finding solutions and overcoming obstacles was something that interested me. Working at the grocery store during the Pandemic has further cemented my career decision. I am attending West Virginia University and majoring in Supply Chain Management. Supply Chain Management is an area that has its obstacles and challenges. I’ve witnessed the devastation of a broken supply chain while working at the grocery store. It is heart wrenching to see scared senior citizens in front of empty shelves and painful to watch frantic people look for necessities. I’ve also seen my father, a nurse, reuse the same mask for weeks. Effective Global Supply Chains could alleviate some of this heartbreak. I have been working day-shift at the store and then coming home to complete homework. Sometimes, I think it would be easier to take a leave of absence from my job, but that wouldn’t help the shoppers. It is my grit and my desire to give back to the community that allows me to keep pushing forward during this uncertain and scary time. It was watching my father go back to school to become a nurse that gave me my grit.

My Global Supply Chain Management Degree and will allow me to be part of the solution. I will help to make sure that systems are in place so that nurses and other front-line heroes like my father aren’t reusing masks and senior citizens aren’t scared in front of empty shelves. I plan to serve non-profit organizations to be efficient and effective. The pandemic and my current medical conditions have called me to serve in a new way, a way that will help people like my father, my inspiration stay safe and well protected because the supply chains won’t let them down.

About the Author: Connor Smith

Connor is attending West Virginia University and majoring in Supply Chain Management. Through grace and grit, he is a varsity athlete, active member of a fire company, lifeguard and member of National Honor Society. Connor states, “It hasn’t always been easy, but my Arteriovenous Malformation (AVM) doesn’t define me. It may present challenges, but how I choose to rise to those challenges is what defines me.”