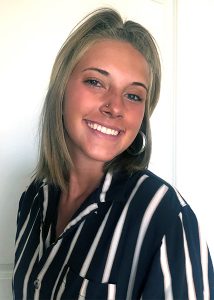 One of the top award winners of the CIA Medical 2020 Scholarship honoring healthcare heroes is Kylie Pyne, a student studying Music at the University of Idaho.

Kylie’s winning essay describes the health challenges her younger brother, Mason, encountered when he was six years old including a spinal cord injury leading to paralysis. Dr. Singh, who cared for Mason, took time out of his busy residency schedule to play video games with Mason on a daily basis, which lifted his spirits and provided Mason the motivation to overcome his hurdle of eating while on a ventilator.

An essay by Kylie Pyne

I would like to begin my essay with some background to the events leading up to the arrival of Dr. Singh, the healthcare professional who impacted the life of my family, majority of the story passed down from my mom. When my younger brother, Mason, was six years old, he went to Seattle Children’s Hospital for a routine hip surgery for an underlying condition he has. There were a couple of other little procedures that would be done at the same so he was on the operating table for 7 hours. Unfortunately, the surgeons were unaware that blood flow was being substantially decreased to his spinal cord during surgery. When my brother had been transferred to the room he would be staying in for his short hospital stay, it became worrisome that he couldn’t feel his legs. After an emergency MRI, it was discovered that T1 and T2 of his spinal cord had died and he was now a parapalegic. He would not leave the hospital for the next three months.

Shortly after finding that Mason’s spinal cord had sustained an injury, he was transferred to the ICU. Dr. White, who was one of two surgeons who had operated on him and Mason’s main orthopaedic surgeon, came to see my mom in ICU. He entered the room with tears in his eyes and my mom’s heart went out to him. He had lost his daughter a year prior to the same syndrome, MPS Severe, that Mason has. He had done the best he could during surgery and sometimes in life, things just happen. She told him it would be okay and moved on to discussing Mason’s care. A few days after being in ICU, Mason’s lung collapsed and he was put on a ventilator. Respiratory therapists were called in who did their best to strengthen his lung capacity while his body continued to struggle as it tried to find its new “normal”. My mom brought me to the hospital that first week in ICU because she wasn’t sure if my brother was going to pull through and wanted me to be able to say goodbye to him. My brother was scared and didn’t know what was happening to him. He just wanted a drink of orange juice, which is his favorite drink, but was not able to take anything by mouth due to the tube in his throat connected to the ventilator. It was sad to see his little body lying helpless in the hospital bed, and with that helplessness a depression washed over him. Thankfully his body did stabilize as much as it could and around the thirty day mark, a decision was made to perform a tracheostomy. The ventilator tube needed to come and he needed the ability to move around more. He was moved to the rehab floor for the remainder of his hospital stay.

My brother’s depression was not improving and the doctors were concerned. This is where Dr. Singh enters the story. Dr. Singh was an orthopaedic resident at the time working with Dr. White. He started coming into Mason’s room almost daily and playing Mario Kart with him for about ten to fifteen minutes each stay. Mason loves video games, is very competitive, and at that time especially loved Mario Kart. It’s the first time my mom saw Mason smile in almost a month and a half. Dr. Singh would make funny comments and I think purposely lose to Mason in funny ways which got my brother to laugh. Mason was not able to talk due to being hooked up to a ventilator with his trach so his laughter was silent. Mason’s whole mood changed and he was much more responsive to therapy and learning how to do things without the use of his legs. He smiled a lot more and overall appeared a lot happier. My mom said Mason’s eyes would light up each time Dr. Singh entered the room.

“Dr. Singh gave Mason a challenge that if he would eat a certain amount of yogurt, he would come by later in the afternoon and play Mario Kart with him. Dr. Singh never once fell through on his promise to come back and play. Some days it was only five minutes but it didn’t matter, he provided the motivation that Mason so desperately needed. Dr. Singh was hope in a dark world for a little six year old boy who was frightened.”

The area that became the biggest hurdle was eating. He was scared to eat because the trach felt weird so he wouldn’t even try. A number of specialists tried working their magic but to no avail. Along came Dr. Singh one morning and informed Mason that he had been told Mason needed to start eating. He made a deal that if he, Dr. Singh, took a bite of yogurt, Mason had to take a bite. He told my brother that he couldn’t stand yogurt so if he could do it, so could Mason who liked yogurt. Dr. Singh pulled a bunch of funny faces, even holding his nose, and finally took his bite. It was then Mason’s turn who had been laughing at Dr. Singh’s antics. Much to everyone’s surprise, Mason took his first bite which was small, but a bite all the same. Each day Dr. Singh gave Mason a challenge that if he would eat a certain amount of yogurt, he would come by later in the afternoon and play Mario Kart with him. Dr. Singh never once fell through on his promise to come back and play. Some days it was only five minutes but it didn’t matter, he provided the motivation that Mason so desperately needed. Dr. Singh was hope in a dark world for a little six year old boy who was frightened. He provided the wings for Mason to fly.

Dr. Singh’s residency ended and a new resident took his place. There has never been a resident like Dr. Singh in all the hospital visits and stays my brother has had over the years. Dr. Singh is etched in our hearts never to be forgotten for the angel, disguised as a healthcare professional, who went the extra mile to rescue the anguished soul of a little boy.

Dr. White, the attending physician, was the constant for my family through Mason’s whole hospital stay. Where Dr. Singh was the motivation for Mason, Dr. White was the calm in the storm for my mom. Even though we have since moved from Seattle, my mom occasionally emails him to get a second opinion. Dr. White continues to this day traveling to different hospitals throughout the country educating healthcare professionals on MPS and the surgery that went wrong for my brother.

As for Mason, he is trach free today and can do a mean wheely in his manual wheelchair. He fondly remembers Dr. Singh and the many games of Mario Kart that he won playing against him! I am so thankful and appreciative for the loving kindness that just one person can have on another, as it makes a huge difference. My brother today is a bubbly, goofy, kid and not a day goes by without him smiling. He still loves Mario Kart, and has found other interests in chess, star wars, and keeping up with professional football as well (especially the Broncos!). To Dr. Singh, Thank you for being a light in the tunnel for my baby brother.

About the Author: Kylie Pyne

Kylie is a very driven, and passionate individual. In life, her love is music. She is a multi instrumentalist and has dedicated all of her spare time to learning the ins and outs of creating and playing music. Outside of school, she has participated in volunteer abroad projects in Tijuana, Mexico, and Kenya, Africa teaching music. She is the oldest sibling in a family of two medically needy brothers, and because of this, learned responsibility at a very early age. She hopes through her dedication, responsibility and passion that she can further pursue her education with ease.